Budo No Arikata
(The purpose of Martial Arts)

The purpose of martial training is simple - it is to win - and yet at the same time it is far more complex than that. Nobody spends years training in order to be defeated but the training involves much more than merely learning how to injure or kill another person in battle.

Once there were two warriors who had trained for many years together and becane closer than brothers. When the day arrived for them to part company in order that they may go off alone to complete their training they met by a quiet stream and vowed to meet again at the same spot in twelve years time in order to share their experiences. 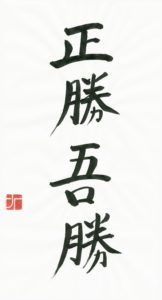 Twelve years later they returned to the stream only to find that the recent rain had turned it into a torrent of water which barred the way to the exact spot of their last meeting. One of the warriors ran to the river and made a spectacular leap over the dangerous torrent landing safely upon the opposite bank. The other warrior walked a few yards upstream and for a small fee hired a boatman to row him accross.

The skills that one man had spent a lifetime of pain, sacrifice and dedication to achieve could be duplicated effortlessly for a few pence. Similarly if our only purpose for training is in order to kill people, simply buy a weapon rather than invest years in training. So our first lesson in Budo No Arikata is to be certain that our training goals are worthwhile ones.

Victory is not merely defeating an opponent, it is perfecting yourself – your personal character as well as your skills. There is an old adage in Budo “Kachi wa saya no moka ni ari”. Physical skills, no matter how good, are simply not enough for there is always someone more skillful around. Attitiude is more important thant aptitude in combat e.g. David and Goliath, which is a good example of an underdog winning through sheer determination and faith.

Skill is useless without the courage and determination to use it. One of the higher purposes of Budo is to develop a mind and spirit, an attitude of strength and character that can win a battle before it begins. This is a far from simple task which requires years of hard training in order to cultivate these attitudes and to rid ourselves of the attitudes and reactions such as anger, fear, selfishness, jealousy and hatred, which are self destructive.

So our inner victory is “Masakatsu Agatsu” - “true victory is victory over the self”, whilst our outer victory must be achieved without trying to win. But how can this be? Simple, the key to victory lies in a strong determination not to lose. This is not merely semantics and requires a profound shift in our focus and commitment.

When a person tries to win they are inclined to take unnecessary risks in order to achieve victory thus leaving themselves open to defeat. When the attitude of not losing is held one must merely wait for an opponent to make a mistake and then exploit it.

However Budo demands an even higher and more noble purpose from us than victory (not losing) in battle and here we come back to “Masakatsu Agatsu”. The highest principle of strategy is to win without a fight. “Bu” means martial and “Do” means way or path. The characters for “Bu” are “Tomeru” which means prevent and “Hoko” which means conflict. So Budo means the way of conflict prevention. In order to prevent conflict we must not only control or prevent our enemies aggression but also our own. - “Masakatsu Agatsu”